Sapphires are one of the most popular gemstones in the world. They're the birthstone for September and are the traditional wedding anniversary gift to celebrate both 45 and 65 years of marriage. They're most commonly found in a deep blue shade, but these cabochon gemstones come in every colour of the rainbow from brilliant white through to fuchsia pink. The only colour you won't find them in is red (that's a ruby!).

The Popularity of Fancy Sapphires

Sapphires have been revered as a precious gemstone for thousands of years, with examples of their use in jewellery dating back to Etruscan jewellery created between 600 and 275 BC. They've been widely believed to hold magical properties by various civilisations, seeing them used as protective amulets against ailments, ill will and even poisoning.

Sapphires are rated 9 on the hardness scale compared to 10 for a diamond, so they're a fantastic choice for a ring that's worn every day. Hard wearing and incredibly eye catching, coloured sapphire gems are also less expensive than their counterparts - so it's easy to see why they're favoured by so many people.

There are so many different colours of sapphire available that it would be impossible to show them all on one page. Below you'll find some of our best-selling sapphire types to give you an idea just how varied sapphire engagement ring colours can be! 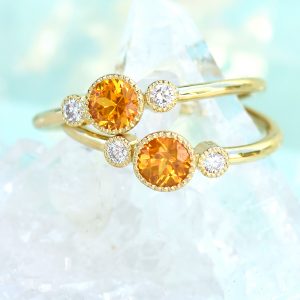 Lilia Nash specialises in sourcing ethical fancy sapphires from fair trade gemstone cutters and mines. There are a variety of ways to design your ring...

The Lilia Nash sapphire catalogue contains our current in-stock range of sapphires available for bespoke and custom engagement rings. Choose your favourite sapphire to customise one of Lilia's signature designs, or to create a bespoke design.

If you have your heart set on a particular cut, carat weight or colour of sapphire, we can help. Lilia can source a coloured sapphire especially for your ring as part of her bespoke engagement ring design service. Send us a message below with more information and she'll return to you with options and a no-obligation for your design.

Make sure you include any important details about your design, including the style of ring you want to create, the metal and as much information about the sapphire as you can.

Lilia Nash is an independent jewellery designer working from a boutique jewellery shop and studio in Lechlade, Gloucestershire in the United Kingdom.

She has a passion for ethical jewellery making, using recycled gold, silver and platinum to create her collections. All of the diamonds and gemstones featured in Lilia's jewellery are either fair trade or lab-grown,  lessening environmental impact and ensuring that fair prices have been paid throughout the supply chain.

Lilia is dedicated to creating handmade jewellery that's of exceptional quality, made with the finest quality materials.