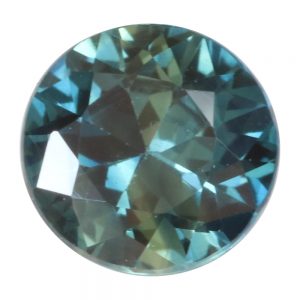 Parti Sapphires are some of the most coveted gemstones in the world. Their incredible blue, yellow and green peacock tones make them highly desirable as a feature gemstone in engagement rings and other statement jewellery.

What is a Parti Sapphire?

Parti sapphires (also known as polychrome sapphires) are a rare type of corundum gemstone that cannot be be replicated in the lab. They include two or three colours in the stone in blues, greens and yellows that perfectly complement one another, emulating similar iridescent colours to peacock feathers.

Measuring 9 on the Mohs scale, they're an incredibly hard and durable gemstone, with only diamonds and moissanite outlasting their durability. They are mainly found in Australia but can also be found in Nigeria, Tanzania and Madagascar.

Parti sapphires are graded just like other gemstones, with the cut, carat and clarity all playing a role in the value. The major difference is that inclusions in parti sapphires can in fact increase the value as it's these flaws that create the dazzling combination of colours in each gem. The placement, colours and cut of the sapphire can drastically increase the value - and thanks to renewed interest in these rare gems, their value has increased in recent years and looks likely to continue on an upward trend. Parti sapphires can therefore not only be considered as a unique jewellery choice but also as a sound investment. Opt for larger sapphires with strong colour zoning for the best future investment.

Lilia Nash keeps a small selection of parti sapphires in her gemstone catalogue that can be used to create bespoke engagement rings or other jewellery. She's also able to source sapphires especially for custom jewellery from ethical fair trade mines in Australia. It's often possible to see photos of the original rough sapphires prior to them being cut, shaped and polished!

These beautiful parti sapphires are currently available for a custom engagement ring or other bespoke piece of jewellery. If you have your heart set on one of these beautiful gemstones, you can contact Lilia using the form at the bottom of this page or on the sapphire page itself.

Don't see the perfect parti sapphire? Contact us with more information about what you're looking for and Lilia will source some other options that you could choose to suit your style and budget requirements.

Lilia Nash offers a range of signature engagement ring designs that can be customised with your choice of diamond or gemstone. Choose between 18ct gold, white gold, rose gold or platinum, with a variety of options from the Gemstone Catalogue that are suitable for each ring design. Don't see the gemstone you're looking for? Contact us! Lilia can source gemstones for any of her signature designs, so if you don't see a parti sapphire engagement ring option for your favourite style, send us an enquiry!

Create a truly unique parti sapphire engagement ring with Lilia's bespoke engagement ring design service. Tell us the design details you'd like to include as well as some information about the type of sapphire you'd like your ring to feature. If you're working to a set budget, let us know. Lilia will send you some different ideas and options to help you create the ring of your dreams.